The goal of shifting security left and embedding it into developer tools and workflows is to make security feedback timely and relevant. When one developer or DevOps engineer has the context for one piece of code that contains issues, it’s easy for them to quickly review the relevant security feedback and make any necessary fixes. But in reality, developers work in dynamic, matrixed environments across numerous commits and branches. It’s easy to get overwhelmed with thousands of security best practices, and the additional complexity of having numerous repositories, developers, and teams makes it challenging to fully understand the security issues at hand.

So how can developers and DevOps engineers get insight into the status of their most important and active repos so that they can prioritize new and existing issues?

With graphical visualizations and lists that can be searched and sorted by various properties, these new screens help your team:

Maintain a zero-tolerance policy for misconfigurations in important repos

In large-scale development organizations, DevOps engineers need to understand the security status of their repos—especially their mission-critical repos. 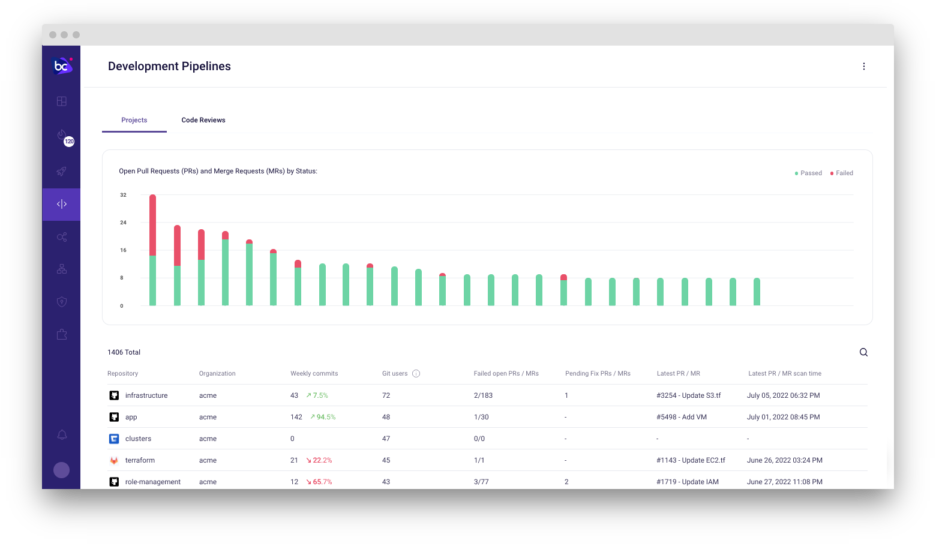 When sorting by these properties, you can home in on repos with the most activity and users or by recent activity. We always recommend starting with the most important repos when dealing with large codebases, and now that’s easier to do with Bridgecrew.

On top of prioritizing critical repos, the Development Pipeline’s Project tab helps you identify high-risk repos that have an unusually high number of misconfigurations and failed pull requests. The graph visualization shows repos with open pull/merge requests by their status—failed or passed—and you can sort the list of repos by:

Sorting by these properties makes it easier to determine which repos to prioritize based on the number of failing code reviews.

The Development Pipeline’s Code Reviews tab drills down even further, showing you your last 1,000 scan items by repo, organization, and item and allows you to sort by: 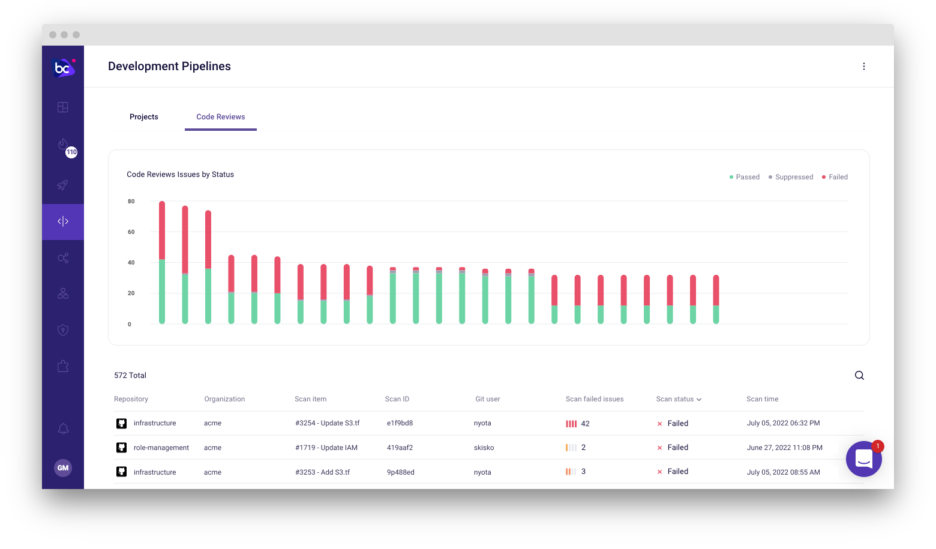 Sorting by these properties will enable you to easily locate high-risk code reviews and identify their associated Git users. Not only will that help individual developers take action on their own faster, but also helps security teams identify which teams may benefit from dedicated security training.

The Development Pipeline screen doesn’t just make it easier to prioritize efforts. It also makes it easier to take action. Hovering over the Project or Code Review row and selecting the Actions icon on the far right will give you options for what to do next.

In Code Reviews, and depending on whether the scan came from a VCS or a CLI run, you’ll have the option to:

In Projects, and depending on the VCS, you’ll have the option to: 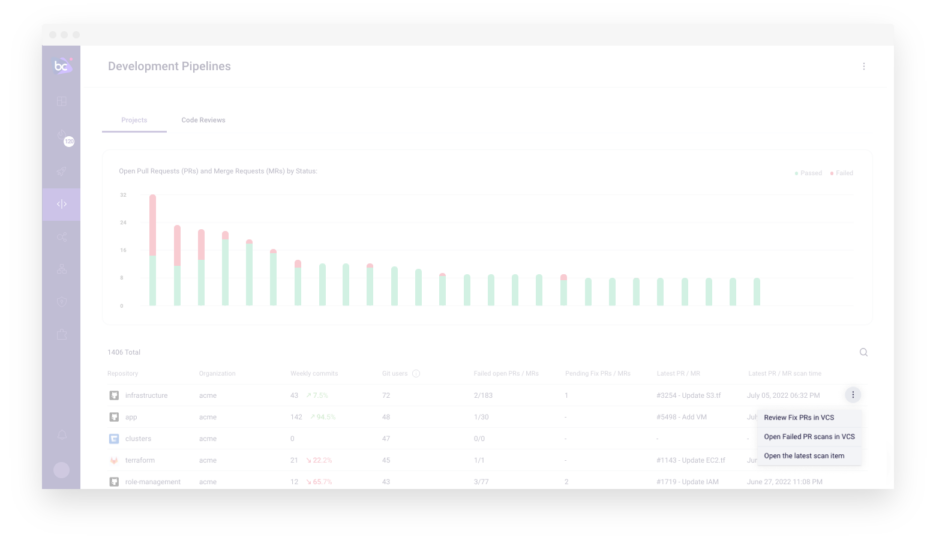 As you’re prioritizing issues in your recent scans and high-priority repos, it’s also a good time to refine where and how feedback is being surfaced. You’ll notice that in the Development Pipeline Code Reviews tab, Bridgecrew will surface all violations of active (non-suppressed) policies, but that doesn’t mean the scan status is failing. Whether or not a scan results in a failed system (i.e. a failed CI/CD build) depends on the Enforcement rules. 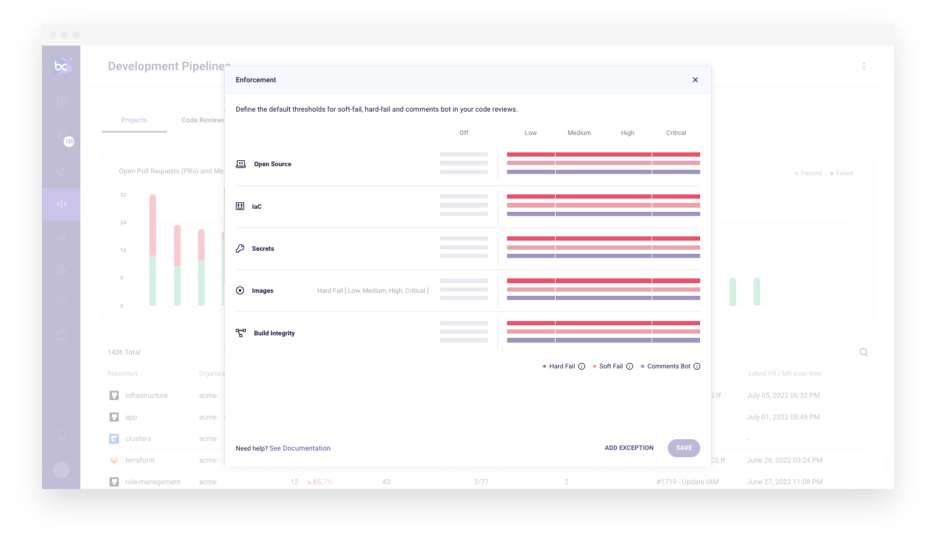 You can also create Enforcement exceptions per repo. For example, in one repo your team may only hard fail critical IaC misconfigurations but may also decide to hard fail image vulnerabilities. In this case, if that repo has IaC misconfigurations and image vulnerabilities, then the scan will fail. All Enforcement rules will be surfaced in the Development Pipeline Projects view. 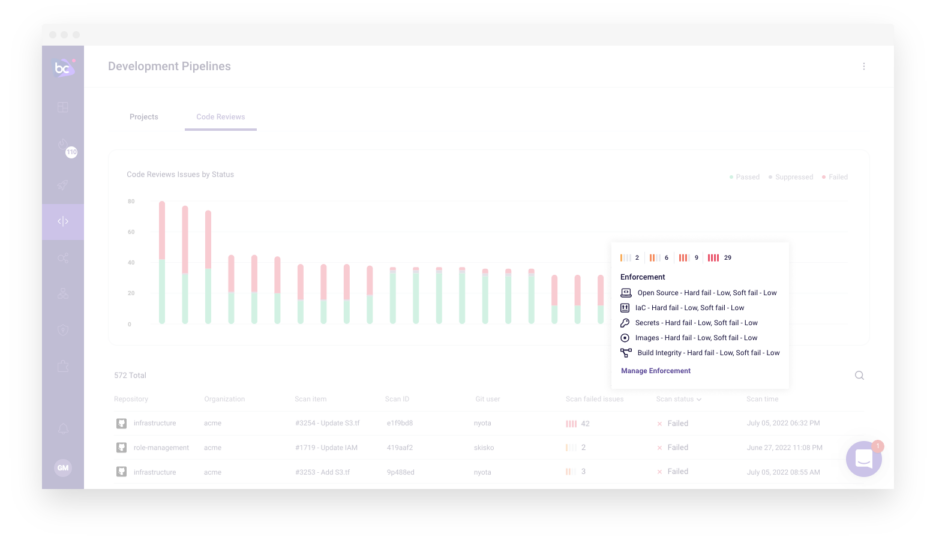 Our new Development Pipeline screen gives you a searchable and sortable view of all your repos so that you can keep an eye on important repos, take action on high-risk scans, evaluate team knowledge gaps, and more. With greater visibility into your code security across your repos and scans, you’ll be able to prioritize security resources as efficiently as possible. To see this new addition and more in action, register for our upcoming Bridgecrew product demo and live Q&A.

You’ve decided to shift your cloud security left. You researched vendors, evaluated solutions, did a…