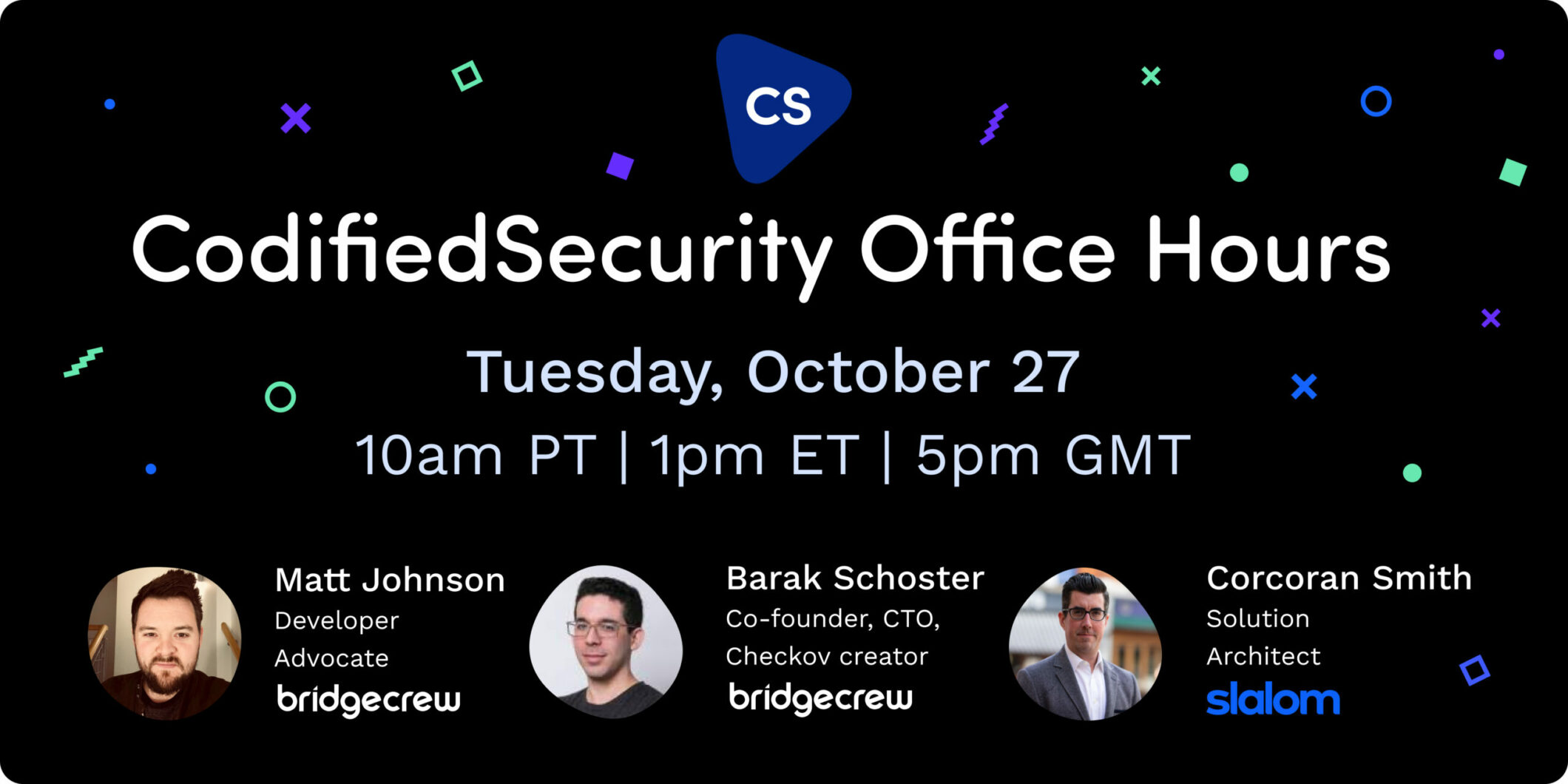 It’s time once again for the #CodifiedSecurity Office Hours! In Episode 03, we featured our first special guest, Corcoran Smith from Slalom Consulting. Corcoran is an early-adopter of our open source static analysis tool for infrastructure as code, Checkov. He joined Barak and myself to share his insights into common security challenges from the consulting world.

Along with Corcoran and even more community contributors in the Twitch chat, we were excited to jump into the cloud security topics that have been on our minds these last couple weeks! You can watch the full recording below, or keep reading for a quick recap of the discussion–including good reads from industry innovators, the latest from Bridgecrew R&D, and some cool new developments from our community.

The crew and I kicked off the episode with hearty introductions, presenting #Githubification (you’ll have to watch for a little dose of that particular rabbit-hole!) and Corcoran’s Halloween hat.

As always, we wanted to give a shout-out to the community and their latest PRs on Checkov and AirIAM. It’s truly awesome to see new contributors and regulars appearing in PRs, issues, and Slack discussions week on week. Thanks again for being a part of our growing community! 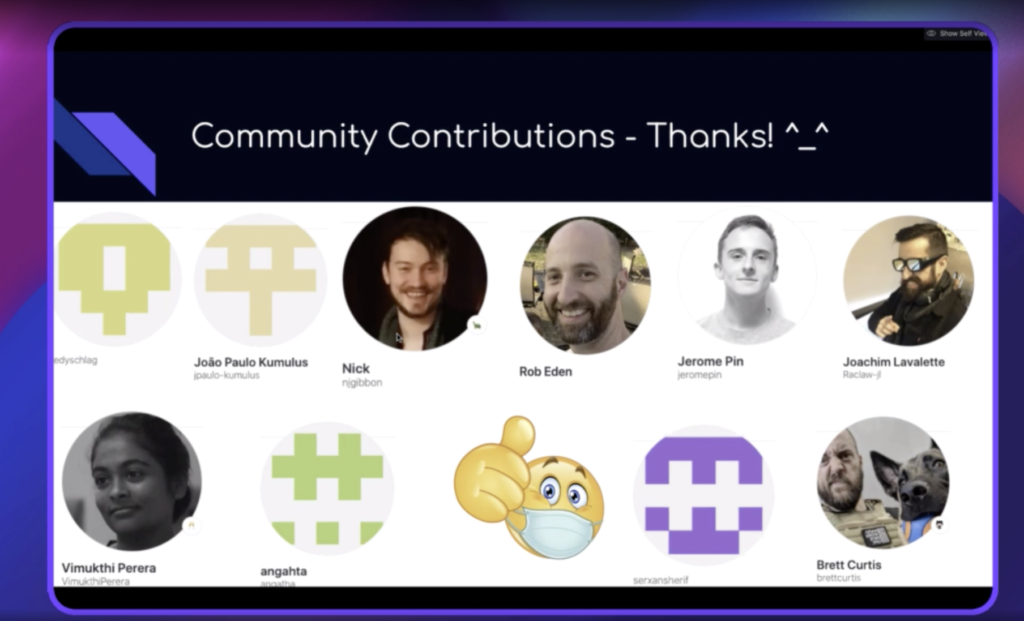 We covered a quick roundup of updates for those interested, highlighting some unmerged issues and PRs which may have deeper dependancies into other ongoing projects, such as Terraform variable rendering. We dig more into these changes later in the episode!

A couple of notable Checkov updates:

We also discussed an idea submitted by Scott Piper via Twitter, that Checkov should detect scenarios which would require AWS “root” credentials to fix, such as a policy to lock all non-root accounts and roles out of the bucket. We implemented this in PR #627–thanks for the great suggestion Scott!

In closing the community updates section, we also called for more use cases and conversations on how to skip modules, annotation of custom modules, and direct scanning of modules in Terraform. If you have thoughts on any of these topics, please jump into our dedicated #checkov Slack channel!

A chat with Corcoran Smith

We opened up the discussion for Corcoran to share some recurring themes that he and his team at Slalom Consulting witness while helping enterprises secure their development processes. To gain full insight, we recommend watching our full interview with Corcoran, but if you’re in need of a taster, we wind our way through some excellent topics such as:

Barak has spent time thinking about how to use Checkov at the planning stage as well as in static scanning. He pointed out that, currently, Checkov can scan certain variables in the code. But plan files contain dynamic environment objects that are injected later in the process. The best opportunity to check these variables in the plan file would be within the CI/CD run. To make use of this extra context for validating security posture before deployment, listen to Barak’s example of dev vs. prod environments. Barak hopes to implement the ability to scan a plan file from Checkov within the next two weeks to give users more power in those steps.

We then discussed TFVars support vs. Plan support, and what each would mean for policy enforcement. Barak explained the benefits of checking the same policies at different stages of the build pipeline, in addition to the flexibility gained from having both TFVars and Plan support.

One community member, Rob Eden, is working on support for local module scanning and dynamically downloading them from the relevant registries with Checkov. The idea is to analyze third-part modules, such as EKS (which itself provisions multiple VPC, EC2 and other resources), with Checkov if they are referenced in your Terraform manifests.

As requested, you can look here for the story of Corcoran’s dog and the home-brewed beer. Come for the #CodifiedSecurity, stay for the hat! 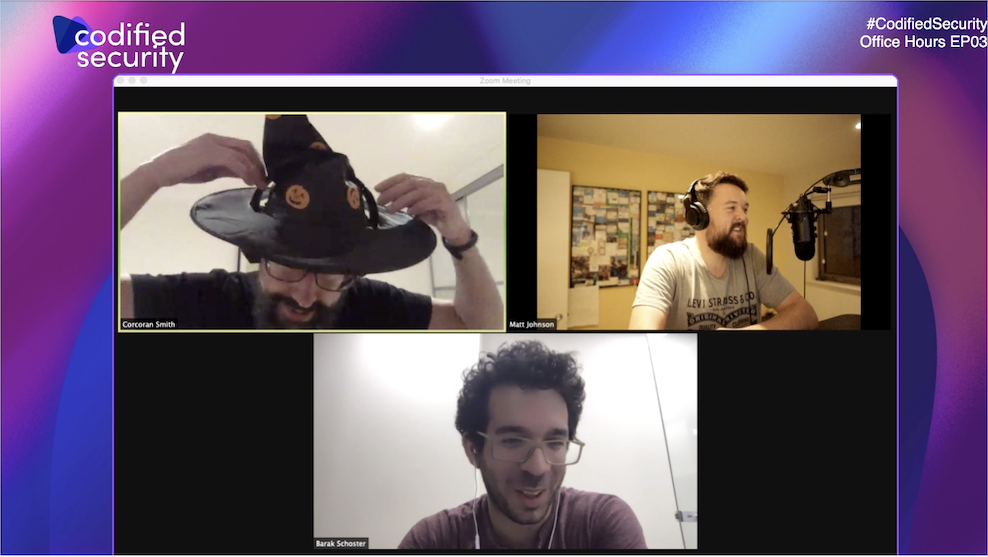 We’ll be back later this month with more stories and tech tangents in Episode 04. Until then, you can chat with us in our community Slack channel. Feel free to join us there to suggest topics or request to get involved in our next livestream!

We’ve been moving at lightning speed here at Bridgecrew! Catch up with us in Episode…

Last week we held the first episode of the #CodifiedSecurity Office Hours, our series of…

It’s been almost a year since we launched our open-source infrastructure as code (IaC) scanner,…